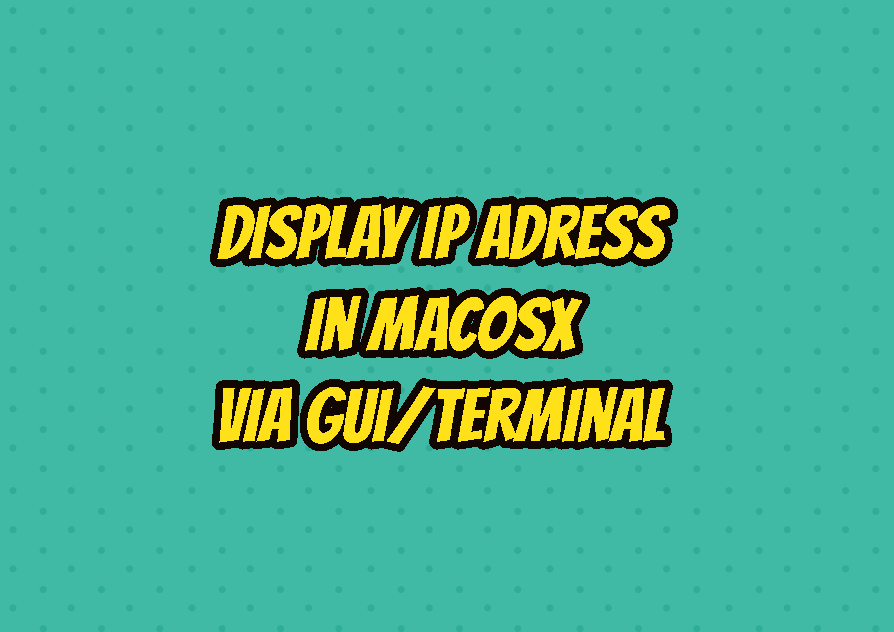 The IP address is an important part of today’s IT systems. As a standard and popular protocol TCP/IP is also used for the MacOSX operating systems. The IP address is used to address a specific host in a network environment. If we are using MacOSX we may require different reasons like accessing remotely to the MacOSX or solve a network-related problem or enabling specific site access for our MacOSX.

IP or IPv4 or IPv6 Address

Before starting to explain how to find the IP addresses in MacOSX we need some general information about different IP address types.

IPv4 is the defacto and most popular protocol used for IP addresses. When the IP address is expressed it is generally referred to as IPv4. IPv4 consists of four block numbers which can start from 0 to 255. 192.168.10.200 is an IPv4 address. In the tutorial, we will list the IPv4 addresses.

IPv6 is a newer version over IPv4 which has more address range but currently not used popularly because of slow adaptation. In the tutorial, we will list the IPv6 addresses.

The MacOSX Network Manager GUI tool provides the IP address of the system. Both the IPv4 and IPv6 are displayed on the Interfaces list. But generally, the IPv6 is not assigned and does not display. In order to open the IP address screen follow Apple Menu->System Preferences->Network.

The ifconfig command is a Unix command which is also used the Unix like operating systems Linux and MacOSX. In order to run ifconfig command open the Terminal command line interface via Apple Menu->Applications->Utilities->Terminal.

The output will be like below where the inet line displays IPv4 and inet6 lines displays the IPv6 addresses of the MacOSX.

The ifconfig is old style command and replaced with the ip command which can be also found all Linux distributions and MacOSX. Just issue the ip command to the MacOSX terminal to get IPv4 and IPv6 addresses.

The output is like below. The inet line shows IPv4 and inet6 lines shows IPv6 addresses.