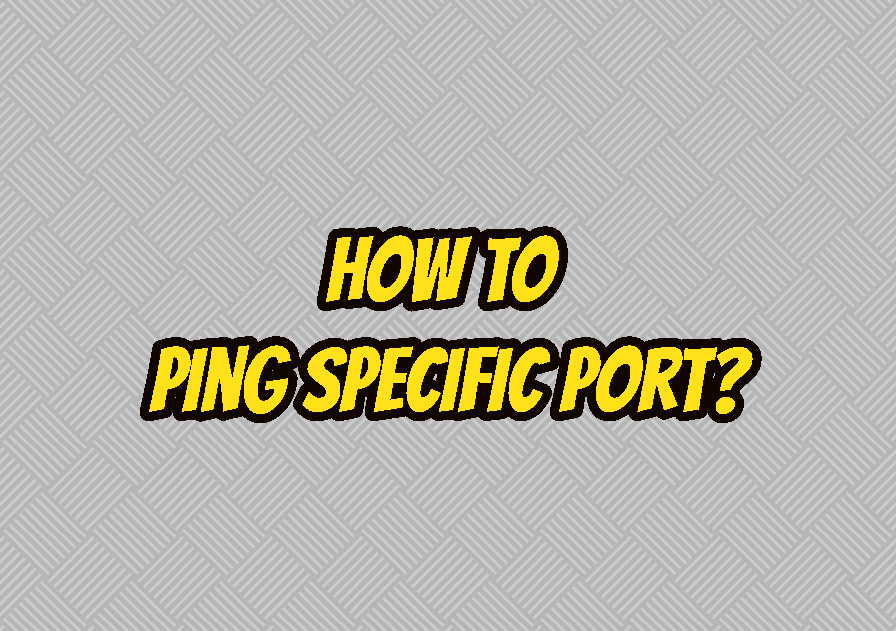 A ping is a tool and command used to troubleshoot network and system-related problems. The ping command normally uses the ICMP protocol and make checks if the remote system is up or down without a TCP or UDP. The ping port is a term used to check a remote port which can be TCP or UDP if it is open and accessible. There are different tools that can be used to ping a TCP or UDP port. Telnet, nmap, putty, netcat,psping are some of them.

Why Ping A Specific Port?

By default, telnet is not installed for both Linux and Windows systems. In Linux systems like Ubuntu, Debian, Mint, Kali you can install the telnet command like below.

Let’s ping the remote HTTP port with the telnet command by providing the port number as 80. We will ping the google.com TCP port number 80 like below.

The output will be like below where the telnet will try to connect remote system port number 80 and when the connection is established e will see the message “Connected to google.com.”

We have made a ping port example with a successful result but what will be the output if the ping port does not work. In the following example, we will ping port number 89 which is closed and will not reply to the ping request.

The output will be like below where the “Trying 172.217.18.110…” line will be shown for timeout and then the “telnet: Unable to connect to remote host: Network is unreachable” message will be displayed.

The nc or with its well-known name netcat is a tool used by security professionals for remote connectivity and management. Similar to the telnet command nc command can be used to ping specific port numbers for a remote system.

The nc command is provided by the Linux distributions like Ubuntu, Debian, Mint, Kali and can be installed like below.

For Windows operating systems the nc command and executable can be downloaded from alternative locations where one of them is https://github.com/diegocr/netcat .

Let’s make a ping to the HTTP port of google.com with the following nc command.

We can see that the connection is succeeded which means the remote port number 80 responds to ping requests. We can also use the IP address for the remote system.

In the following example, we will ping the google.com domain name pot number 89.

As we can see from the result we will get the “Connection refused” message which means the remote port does not respond to ping.

The nmap is a security tool used to scan remote systems ports and services. The nmap can be also used to ping a specific port. Nmap can be installed for the Linux distributions like Ubuntu, Debian, Mint, Kali like below.

The syntax of the nmap command for the port ping is like below.

Let’s make an example with the nmap to ping remote port. We will provide the port number with the -p parameter which will be 80 and the remote system is google.com.

The nmap is the fastest tool to ping a specified remote port. The command will be executed in 2 seconds and detailed output about the remote port will be provided like below. The line “80/tcp open http” simply expresses that the remote port number 80 responds to pings.

Alternatively, we can specify the IP address of the remote system we want to ping port.

The output will be like below where the open ports will be listed with the STATE open.

The syntax of the Test-NetConnection command is like below.

We will use the Test-NetConnection command to test google.com port number 80.

The output of the ping remote port with the Test-NetConnection command will be like below. We can see that remote system ComputerName, RemoteAddress, RemotePort, InterfaceAlias, SourceAddress, TcpTectSucceeded information is provided.

Let’s make another test for port number 89 for google.com.

The output is like below which means the ping port is failed. For failed ping port operations extra information like PingRelyDetails (RTT), TcpTestSucceeded is provided.

The PaPing tool is a 3rd party tool created to ping remote specified port. The PaPing project is open source and located in Google Code.

The paping.exe is used to ping remote port. The port number is proıvided with the -p option and the number of the ping packets are sent with the -c command. In the following example, we ping the wisetut.com port number 80 for 5 times.

The curl command is created to download remote resources over the network by using the FTP, HTTP, HTTPS, and similar protocols. It can be also used to make a simple port checks which can be also called a ping port. The following syntax is used to ping port for the specified IP address or hostname.

1 thought on “How To Ping Specific Port (Windows and Linux)?”