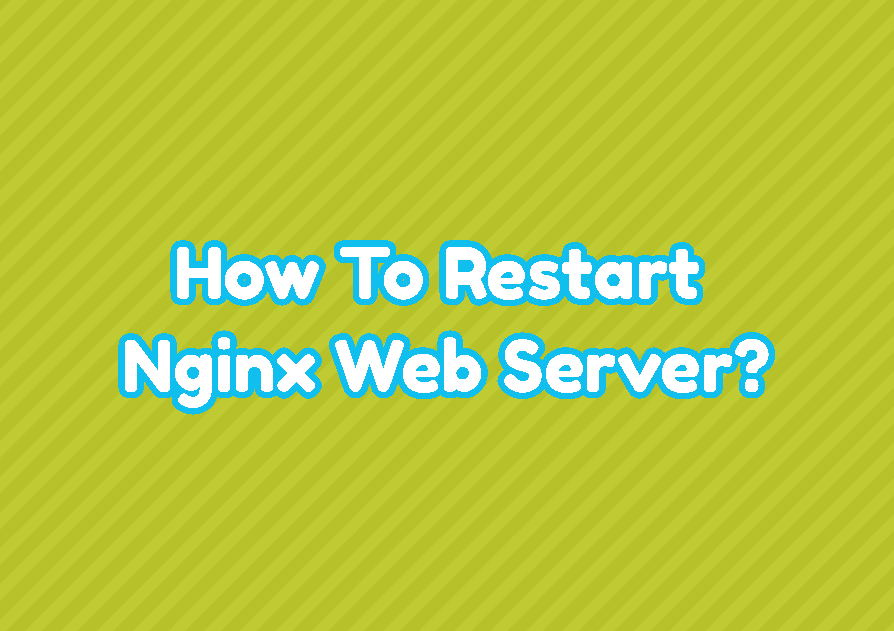 Nginx is a popular web server that is an alternative to the other web servers like Apache, IIS, etc. Nginx is a free open-source, high-performance initiative web and reverses proxy server. Nginx provides better performance against Apache and IIS. Most of the Linux system administrators deal with the Nginx web server in daily operations. In this tutorial, we will examine and learn how to restart (stop&start) Nginx server using different methods and commands like systemctl, service, nginx command, kill command, etc.

Before restart the Nginx listing and showing the current start of the Nginx service and server will be very useful. Also, the last start time can be listed with the systemctl status command like below. The Nginx service name is nginx or nginx.service

The easiest, straightforward, and reliable way to restart the Nginx server or service is using the systemctl restart command. The systemctl command provided by most of the Linux distributions like Ubuntu, Debian, Mint, CentOS, RHEL, SUSE, etc.

If the Nginx service is restarted properly without a problem we will see nothing on the command-line. If there is an error like configuration, permission, etc. the error will be printed to the terminal/command line. In the following example, there is a permission error and the Nginx service couldn’t be started successfully.

We can also restart the Nginx gracefully by using the systemctl reload command. As stated previously graceful restart will create new child or worker processes with the new configuration and then stop old Nginx processes properly.

Or with the full Nginx service name

SystemV is an old service management way for Linux, Unix, and BSD systems. Even replaced with the systemd/systemctl SystemV init.d scripts can be used to restart the Nginx service.

SystemV init.d script also provides a graceful restart method with the nginx reload script like below.

Nginx executable file is used to start the web server, load configuration creates child/worker processes, etc. Also, nginx can be used to restart the webserver by sending process signals. Generally, the nginx binary is located in the /sbin/nginx but alternatively located in the /usr/local/nginx/sbin/nginx , etc.

service command is another alternative to restart Nginx webserver service. service restart will be used to restart the Nginx server which is named nginx like below.

the service command also provides the grafecul restart ability with the service reload command like below.

Nginx is a complex web server that is configured with different configuration files for single or multiple domains. During changes and restart there may be syntax or typo errors. When the Nginx service restarted if the configuration is not valid then it will not start and stay in the stopped status. In order to start again, the error should be corrected. In order to prevent this, we can check the current Nginx configuration files before restarting them with nginx -t command like below.