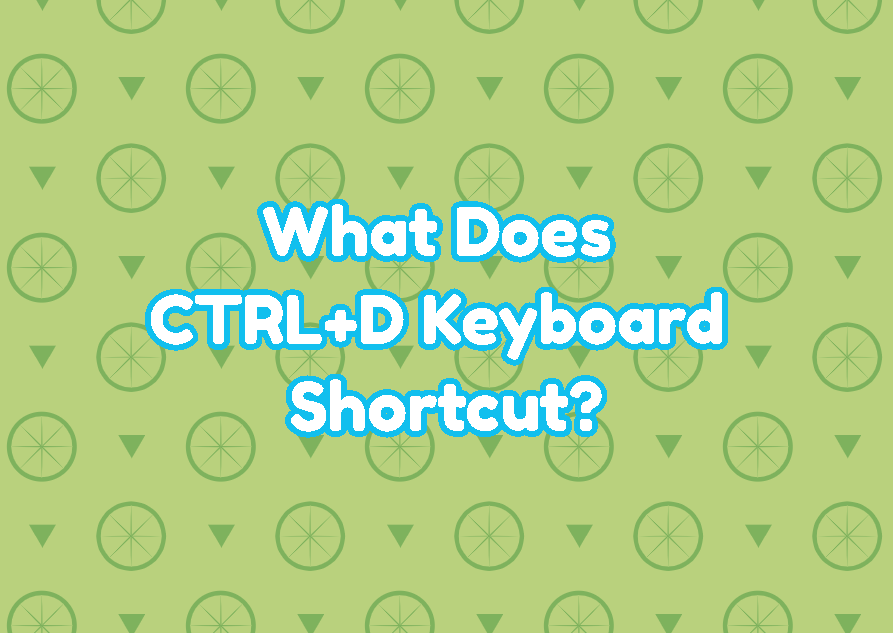 Keyboard shortcuts are easy, practical, and fast ways to complete some operating and actions. The CTRL+D is a popular keyboard shortcut that is implemented by pressing the D key while pressing the CTRL key at the same time. Keep in mind that D is the key where the case of the D is not important.

One of the most popular usages and use cases of the CTRL+D keyboard shortcut is using it with web browsers to create a new bookmark for the current web page. The CTRL+D is supported by most popular web browsers like Google Chrome, Internet Explorer, Mozilla Firefox, Opera, Safari, Microsoft Edge. Pressing the CTRL+D will open the following bookmark creation screen where the Done will add a new bookmark to the specified folder named Bookmarks bar .

Fill Selected Cells with CTRL+D In Excel and Google Sheets

When the CTRL+D keyboard shortcut is pressed the cell A5 is set to 4 as the upper cell named A4 value.

Another use case for the CTRL+D keyboard shortcut is Microsoft PowerPoint. The selected slide can be duplicated or copied automatically and added after the source slide. Also, the CTRL+D can be used to duplicate or copy multiple selected slides easily.

Log Out Current Session with CTRL+D In Linux Bash

The CTRL+D is also used in Linux operating systems in order to close the current bash session. If you open the bash and changed into another user you will close the last user sessions and go back to the previous user sessions. If the current session is not changed this session will be closed.

Exit From Interactive Shell with CTRL+D In Python

Python is a popular programming language that is used to create scripts and applications. Python also provides an interactive shell in order to run Python instructions and code. By pressing the CTRL+D the current Python Interactive Shell can be closed.