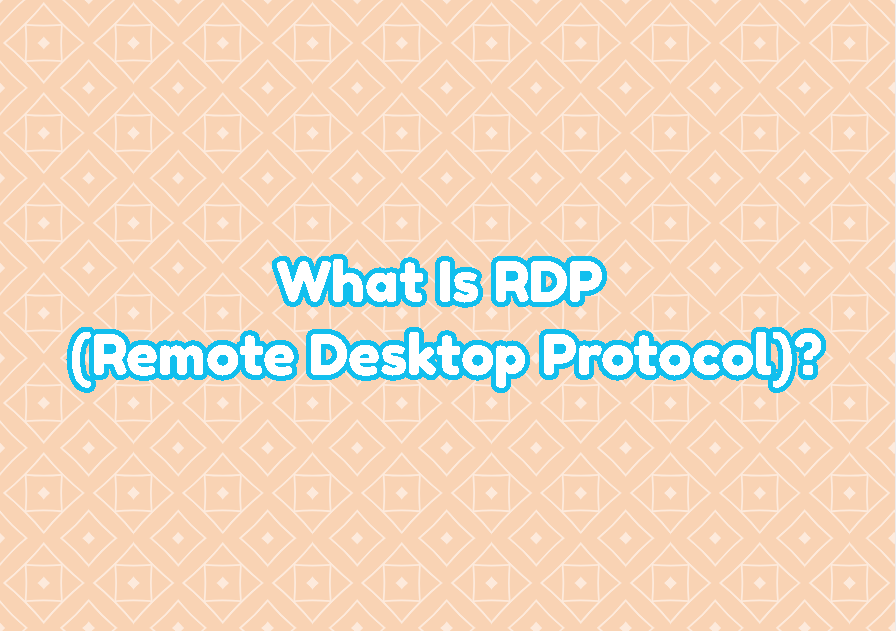 RDP or Remote Desktop Protocol is a remote access protocol created by Microsoft for its popular Windows operating system family. RDP provides GUI (Graphical User Interface) to the remote system. RDP works over the network or the internet. RDP has the client-server architecture where the server should be running the RDP service in order to accept incoming RDP requests.

RDP 4.0 is based the popular ITU starndard T.128 which is also called as T.share.

RDP 5.0 was introduced with the Windows Server 2000 and added some features like printing to local printers, efficient and less bandwidth usage according to the previous version.

RDP 5.1 was introduced with the Windows XP and added support for 24-bit color and sound. Also, the Terminal Services Client renamed as Remote Desktop Connection. This version was also provided for the previous Windows versions like Windows 2000, Windows 9x, Windows NT 4.0.

RDP 6.1 was released with the Windows Server 2008 and added support like administrator console connection.

RDP 10.0 was released with the Windows 10 and provides advanced features like AutoSize zoom in addition to using H.264/AVC encoding.

As an advenced and popular protocol RDP provides a lot of features according to its competitors like VNC.

Windows operating systems provide the RDP client by default. The RDP client can be opened with the mstsc.exe command from the Run of just navigating the Start Menu->Windows Accessories-> Remote Desktop Connection.

You will see the following Remote Desktop Connection application main screen. It is very simple where you can put the remote system IP address or domain name into the computer part and click to the Connect.

If you need to see more options click to the Show Options which will show following tabs to configure different settings.

General tab is used to put user name and save the credential for later connections. Also this connection can be saved as a shortcut and opened easily later by clicking to the shortcut.

Display tab used to configure the diplay size like fullscreen an other resolutions. Also the color quailty or depth is configured in this tab like 32-bit, 16-bit etc.

Local resources are used to share local devices and resources with the remote server and redirect remote server audio to the local system. Also partitions can be shared by clicking to the More button.

Experience tab is used to set the current network connection speed for the optimum RDP experience. By default the bandwidth detected automatically and the RDP quailty set automatically. But you can also set the quality manually where lower speed means lower graphic quality.

RDP is a popular protocol which is used and configured on a lot of Windows systems. These systems generally open and connected to the internet and pose some security problems. If you want to use RDP and connect to the internet please take following topics to make your RDP more secure.